Tear in Our Social Fabric: Mahsa Amini’s Death in a Time of Roe vs. Wade 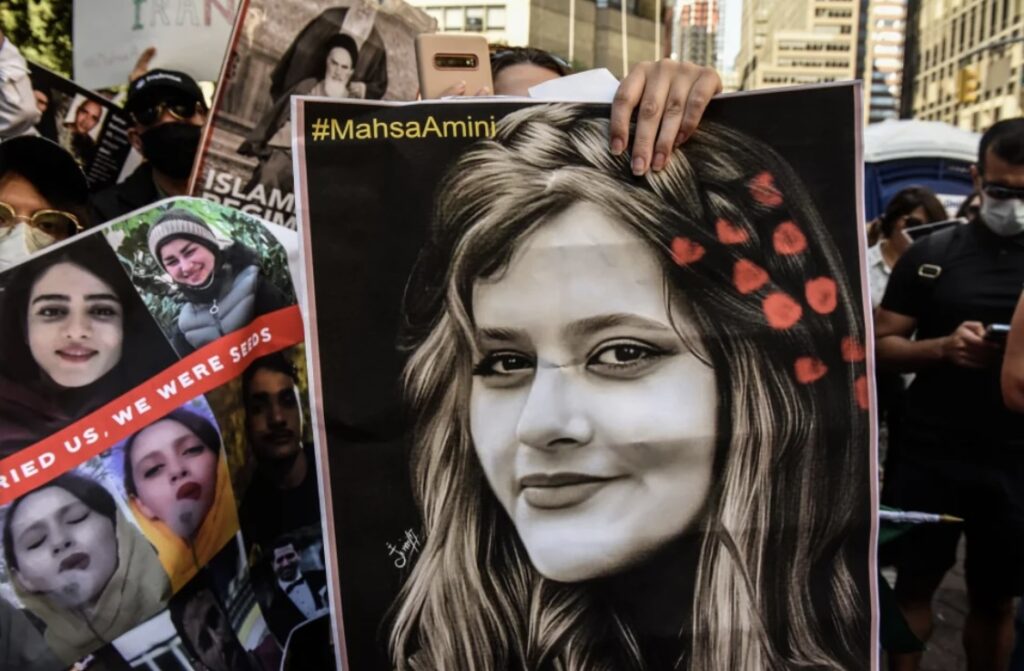 By Tracey Squires | Many die silently, their lives stolen by injustices; their stories are sutured wounds that have never asked to be closed. We hearken to this “many” rarely, and even less so if they are women. We hear their voices after the violence has been meted out, we hear them only in the atrocities of their deaths and never in the exertion of their lives. Women, across every diaspora, are told to conform or be confined, to bury their truth for no one is listening.

Iran has brought to center stage the murder of Mahsa Amini, the censorship of the woman’s body, and those who consider themselves as stakeholders in it. Interestingly, we are having this conversation in a very tumultuous time in the history of women’s rights, one that we might define as the unraveling of progress made by Roe vs. Wade. Mahsa Amini’s death incites not only rage but also emotions of uncertainty and fear for women everywhere. For in our reflection and anatomic structures, some see that they have a God-ordained claim. Where does that leave us then, us women? With the rise of civilization, women have been forcibly put into the category of property, something to simply sell or buy, no less than an object marketed. Our men inherit and bequeath the title to our bodies from this system of patriarchy and when we make humans a thing to be owned, we are in dangerous territory. Amini, a twenty-two-year-old Iranian woman, was arrested on September 13, for improperly wearing the hijab and thus violating the country’s rigid dress code. She died three days after her arrest; many citizens allege that Amini succumbed as a result of police brutality. Iranian women have taken to the streets in protest; there is global outrage everywhere.

Considering Amini’s death, considering the undoing of Roe vs. Wade, we see that it is not simply an issue of religion or morality or even the rudimental philosophy of living. Our problem is deeply entrenched in a belief that the world and more specifically- men, could legally lay claim to a woman’s body. Is that not the equivalent of slavery then, this notion that hers is his and everyone’s except herself? Amini is not the first or the second, the third, or even the fifth. She is one in thousands of silenced women, her death resounding much too loud to not be heard. In truth, many have used religion as a rubric for reasoning in the oppression of women. However, history will tell of how those seated at the apex of society’s hierarchy have mangled and molded divinity to accommodate their needs. How ironic is it that vessels capable of bringing so much life can be given death in return?

Here in the U.S., we claim our nation to be a neoteric society, but we are no different. We too are governed by the fundamental beliefs of an archaic system. We are in no position to spurn or claim progress over the Islamic Republic of Iran. Time has passed, we have fought for the right to vote, and we still fight for equality. However, movement is not progression, and we must remember that we have had to toil for the things symbiotic to human existence. Segregation, the ability to buy and sell property, and the right to not be property ourselves, are all fruits of our ancestors’ labors. In fact, the very notion of having to fight for something that is rightfully yours is so deeply appalling and reflects the beliefs that our great nation was built and still exists under.

Ninety-one percent of the justices who voted for the overturning of Roe vs. Wade were men. Five of just nine justices voted to ensure the censorship of women’s bodies. These statistics speak for themselves. We tell our daughters to sit nicely, to close their legs, and to be decent and respectable young ladies. We tell them: your skirt is too short, your dress too thin, your lipstick too red, your smile too wide, your gaze too friendly, your woman too much. Inevitably and essentially, they hear that their existence is a sin itself, a curse they took on with one bite of an apple. Temptress.  What do we tell our sons? Does the world not teach them how to be conquerors in their conquest, how to take and to have? Do they not learn from us that the woman’s body is their own?

More recently, a Saudi Arabian woman was arrested for a social media post, her crime being: causing a “tear in the social fabric.” There is in fact a tear in our social fabric, it is us women breaking away from the cold hand of the patriarchal system.

Tracey Squires is of Guyanese descent and is a student at Medgar Evers College. Her major is English and Cultural Literature. When she is not enjoying a good book, you can find her exploring nature, enraptured by the wonders of our natural world.