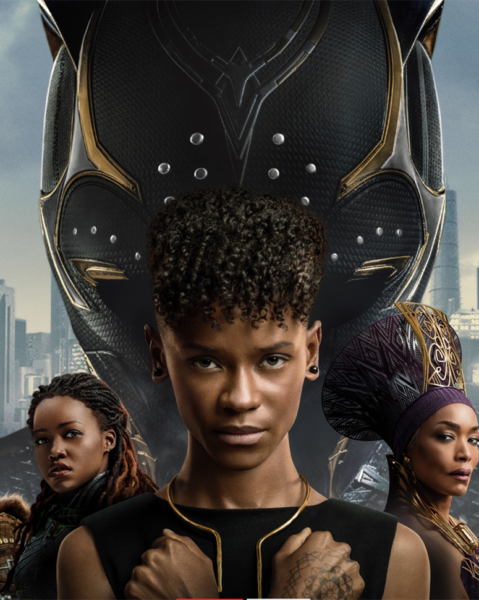 By Malik Windsor | Last weekend I returned to the movie theatres for the first time since the beginning of the 2020 pandemic to see Marvel’s newest installment of Black Panther. Overshadowed by the memory of the late Chadwick Boseman, Black Panther: Wakanda Forever tells a story overrun with grief and the feelings that follow. The movie manages to entertain its fans with big superhero fights and large explosions while testing its central characters’ ability to cope after suffering a great loss.

Due to the real-life death of actor, Chadwick Boseman, who previously played King T’Challah in the original Black Panther and other Marvel films. Wakanda Forever had the difficult responsibility of acknowledging the death of the Black Panther while continuing a story satisfying to viewers. The plot can be difficult to follow at times but overall, the film displayed memorable performances from notable actors like Angela Bassett, Lupita Nyong’o, Letitia Wright, and Michael B. Jordan.

Black Panther: Wakanda Forever (2022) follows King T’Challa’s loved ones as Wakanda struggles to maintain its position as a world power following the death of its protector. Wakanda Forever uses grief to explore the emotional maturity of its characters. From the outset of the film, we’re filled with emotion as Shuri (Letitia Wright) desperately tries to find a cure for her ill brother. She fails to develop a cure and her brother dies, resulting in an ardent display of agony, fury, solitude, and uncertainty. Shuri questions the importance of her intelligence since it does not help her prevent death. Following the funeral of King T’Challa, Shuri drowns herself in work to clear her mind. Her mother, Queen Ramonda (Angela Bassett) encourages her to follow the family traditions of laying the deceased to rest. Shuri’s struggle with grief creates an inner conflict for her as she refuses to perform the rituals and rejects the customs that govern the legacy of her ancestors. Her struggle with grief only continues as she stops thinking clearly and begins to make rash decisions, ultimately resulting in her kidnapping towards the middle of the film.

Shuri’s kidnapping is an exaggerated consequence of her negative processing of grief. During her captivity, Shuri meets the antagonist, Namor (Tenoch Huerta), the leader of an underwater society called Talokan. Namor learns that the Wakandans also have vibranium and attempts to create an alliance against the other surface nations. Namor and Shuri become allies in grief when one of the Talokanils is killed while Shuri is rescued by Nakia (Lupita Nyong’o). Already motivated by vengeance due to the grief he carries for his ancestors, this event sets Namor on a violent rampage resulting in the unfortunate death of another pivotal character. Namor’s vengeful action portrays another negative grief process as his loss causes him to forget his intentions of a peaceful alliance with Wakanda.

Before she can fully grieve the death of the Black Panther, Shuri experiences another significant loss. Like Namor, Shuri becomes overcome with feelings of vengeance. The peak of Shuri’s battle with grief is when she attempts to become the next Black Panther. Instead of meeting with her known ancestors, Shuri encounters a former Black Panther motivated by vengeance. This scene is significant because it foreshadows the result of choices driven by vengeance, not love. The moment prompts a shift in Shuri’s character as she tries to be more focused, less quick to react, and guided by the legacy of her ancestors. The power of the Black Panther and Shuri’s experience with grief prepared her for a thrilling final battle against Namor.

She wins this battle by empathizing with Namor’s grief and offering protection and secrecy for his kingdom.

By the end of the movie, Shuri abdicates the throne of the Black Panther but acknowledges the customs of her ancestors. She becomes focused on maintaining her family’s legacy from the background by passing on the traditions to an upcoming central character. Shuri’s experience with grief is a story of character evolution.